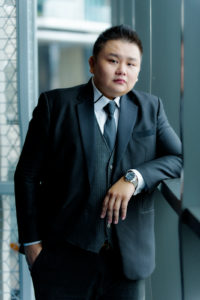 Since the age of 18 when most youth of this age still have no clues of what they want to do in their future, Calvin already has a vision of becoming an entrepreneur. He chose to work in the industry rather than being confined in a classroom. For him, life teaches him more lessons than he had ever learned in school. Hence, he started building businesses revolving around homestay, rental management and hostel management.

Prominent Suites Sdn Bhd was incorporated in March 2015 when he took over the hotel management of Resort Suites Hotel at Bandar Sunway when he was only 30 years old. It is currently operating 150 rooms and serving more than 80,000 hotel guests up as of December 2016. Ever since, Resort Suites Hotel has been hitting an average occupancy rate of 70% and 80% consecutively in year 2015 and 2016.

An army of sheep led by a lion can defeat an army of lions led by a sheep. Under Calvin’s leadership, Artez group has been growing stronger and stronger each day.